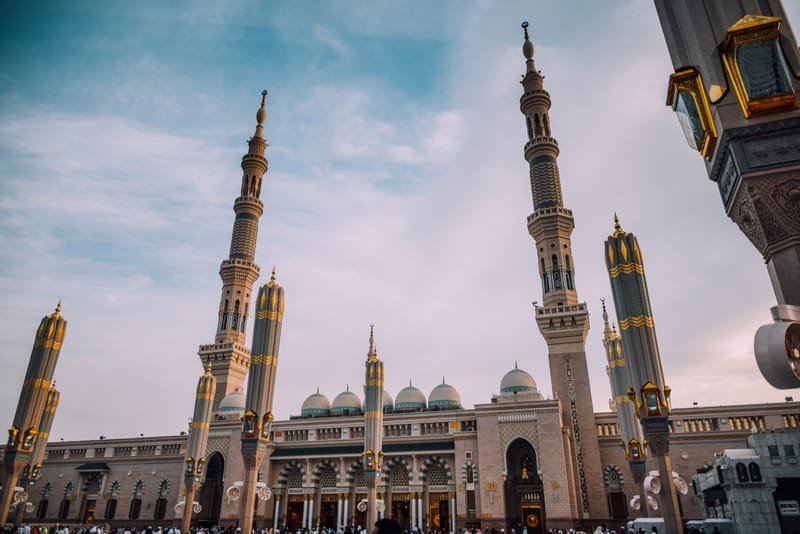 (Maqbaratu l-Baqī) is a cemetery in Medina, Saudi Arabia, located to the southeast of the Masjid Al-Nabawi. The mosque is built where the Islamic prophet Muhammad used to live, and is currently buried. The cemetery therefore holds much significance. It contains many of Prophet Muhammad’s (PBUH) relatives and companions.

Quba is the place on the outskirts of Madinah where the Prophet (P.B.U.H) accompanied by Abu Bakr (r.a.) arrived and first stayed after emigrating from Makkah. They arrived on Monday 12th Rab’i al-Awwal, fourteen years after Prophet hood and this date marks the beginning of the Islamic calendar (Hijra). (16th July 622 CE). A Masjid was established here by the Prophet (P.B.U.H) the first to be built in Islam.

This is Masjid al-Qiblatain (Mosque of the Two Qiblas). It is historically important to Muslims, as this is where in Rajjab 2 AH the revelation of the Holy Quran came to change the direction of the Qibla from Bait-al-Maqdis in Jerusalem to the Ka’bah in Makkah.
During his time in Makkah, the Prophet Muhammad (P.B.U.H) used to pray towards Bait-al-Maqdis, with the Ka’bah in front of him. When he migrated to Madinah, he prayed towards Jerusalem for 16 months, but he hoped it would be changed to the Ka’bah.
During Dhuhr prayer or it was said that it was Asr, the Prophet (P.B.U.H) had led his Companions in praying two rak’ahs , when he was commanded to face towards the Ka’bah by the following revelation in the Holy Quran in Surah al-Baqarah:-
“We see the turning of thy face (for guidance) to the heavens: now Shall We turn thee to a Qibla that shall please thee. Turn then Thy face in the direction of the sacred Mosque: Wherever ye are, turn your faces in that direction. The people of the Book know well that that is the truth from their Lord. Nor is God unmindful of what they do”
The Prophet (P.B.U.H) turned around towards the Ka’bah and the Sahabah copied out of obedience. Thus the Ka’bah became the new qibla of the Muslims for all time to come.
Masjid Masjid al-Qiblatain used to uniquely contains two mehrabs, one in the direction of Bait-al-Maqdis and the other towards Makkah.

Mount Uhud holds a significant value in Muslim history. Second battle of Islam was fought here, in which Muslims were defeated, and Prophet Muhammad is reported to have lost his tooth in this battle.

Located in north of Medina. It is 1,077 m (3,533 ft) high. It was the site of the second battle between it occurred between a force from the Muslim community of Medina led by the Islamic prophet Muhammad, and a force led by Abu Sufyan ibn Harb from Makkah.

The Battle of Uhud was fought on March 19, 625 Shawwal 3 AH in the Islamic calendar at the valley located in front of Mount Uhud

Madain Saleh (Al-Hijr) dates back to the Nabataeans Civilization considered as one of the very important archaeological site in Saudi Arabia that is called “The Capital of the Monuments” as it contains huge amount of diverse and multifaceted monuments. Saudi Arabia’s hidden treasure where history of extinct Thamud Tribe, Lehyan Tribe and Nabataean Kingdom lived in Al-Ula and Madain Saleh; from Dedan Kingdom to the Old Town and its ancient history.

This site invites everyone to come in the kingdom of Saudi Arabia and visit those wonderful treasures in the city of Al-Ula and Madain Saleh, a place of love, peace and generosity of inhabitants.

Just 2: KM away from the Elaf Taibah Hotel.

Madinah is known for being one of the biggest producers of high quality dates; you are likely to find all kinds of shops in the Dates Market selling distinct variety of delicious dates suiting to all kinds of tastes.

The Prophet Mohammed (PBUH) said that “One who takes seven Ajwa dates in the morning, he remains under the protection of Allah from magic and poison for whole of the day”.

As many as seven Ajwah dates comprise 120 calories Those who have made it a habit to take 5 to 7 Ajwah dates without fail everyday are less susceptible to carcinoma and circulatory diseases.

The Ajwah dates are fraught with 70 percent of sugar and 30 percent of fluoric acid acid, sulphur protein, copper, iron fiber and potassium.

The park is located on the southern side of Madinah,  on the borders of the Second Ring Road of Quba area. The total area of park is about four square kilometers. It is one of the vital outlets for Madinah residents